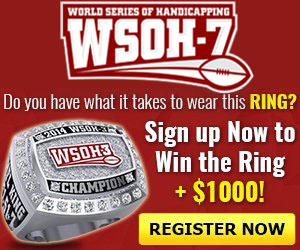 Another quirky week is in the books, with some baffling outcomes.  Other outcomes were predictable as evidenced by the field and what their consensus picks were.  As far as the overall standings is concerned, there were some major movers…. Some GAPS widened while other GAPS narrowed, and quite frankly, some gamers picked themselves right out of the competition, which I never delight in.  This is the business of handicapping, and it can be a cruel game – especially if you find your personal value in your ability to make picks.  This game should be fun, but 1-6 or 2-5 ain’t fun, AND finishing in the negative is the guttiest of gut punches… and sometimes it seems the harder you try the worse your weekly output is.  I delight in the challenge of the game – because it’s truly the most challenging but enlightening sports based gaming activity I’ve ever participated in.

The World Series Handicapping contest is simply the best around and revolutionizes how the average joe blow gamer approaches their strategy when it comes to taking on Vegas and Vegas odds-makers.  After all – that’s what we all want right??  I fun and low-risk way to beat Vegas at it’s own game while engaging with other sports fans in healthy competition – it truly fattens the enjoyment pot of watching football.

Props for Week 14 will go only to SirBear who finished with a perfect 7-0 record and 28 points to go along with a tidy $50 Holiday Bonus.  Congrats your are 77 points off the lead but are pretty much out of it, and should get $50 for sticking it out.  I always love the picks after I see them and the final results.  I look at SirBear’s slate, and think “dang that makes perfect sense” … and it really does, it’s just that hindsight thing kicks you when your down.  All of SirBear’s picks make perfect sense except one… Green Bay was primed to destroy a team, I thought it would be Arizona last week, but I was wrong, SirBear was right.

The Giants made sense against a terrible Washington team, and the Dolphins in light of New England’s struggles in South Beach was almost a no brainer.  Indianapolis’  defense has been lights out the last four weeks and on paper should’ve stopped Houston.  San Francisco was the most obvious given the loss of Emmanuel Sanders and the only shock was that the confidence points were listed as one!!  I’m dumbfounded by the Oakland pick, especially given their clear cut tanking strategy AND how much the Steelers needed this game.  The pick is more confusing than how the Steelers ultimately played.  So props to SirBear, who needs three more weeks like this to have a shot.

Fred14 picked the perfect week to go 6-1 while fan favorite PunchFaceJenkins picked the worst week to go 1-6, making it a certainty that PunchFace Jenkins wants nothing more than to pitch themselves in their own face.  They are now over 57 points off the lead and in 4th place behind bruin7 and familiar face Allredb1 who sits in 2nd place close to 40 point behind the leader.  What more can be said here….

Every week has to be good, there is ZERO margin for error.

World Series of Handicapping: Look at the Leaderboard (Week 8)