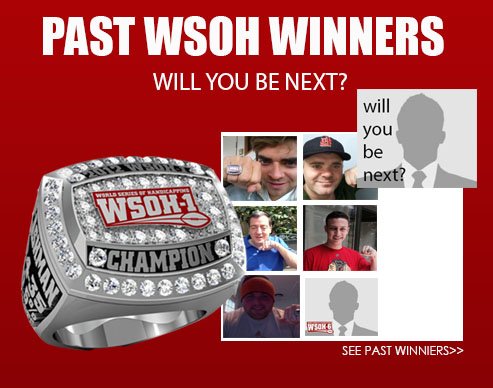 The numbers are in… all the reports have been run, week 15 is in the books, and the books are laughing all the way to the bank.  Making NFL picks on in the World Series of Handicapping contest is a crazy business.  There were a bunch of crazy outcomes this week, that jacked up the common bettor while creating a nest egg for the house that many could retire on.

Raise your hand if you saw the Rams, Steelers, Redskins, 49ers, winning this week and those weren’t the only outcomes.  Several underdogs covered as well further advancing the Vegas position on taking you money, or in our case putting us in the negative.  There was some serious ground made up on our leader Fred14 as well.  So we have a boat load of questions to ask with the final two weeks coming up, but in the meantime let’s hand out some props to those that excelled in week 15.

Props to both Faolcho and beejmi, for finishing 6-1 this week with 25.90 points.  4 total competitors finished with same record but only two will get props.  Why you ask?  The reason is simple… even though they each got one wrong, that one incorrect outcome for both players was assigned a confidence point of one!! That my friends is how you play the game, and how you make up ground.  YOU MUST GET YOUR CONFIDENCE ASSIGNMENTS buttoned up.  For Faolcho –  He picked Arizona and I totally get that, because I did as well.

They seemed like they could win the game, and Atlanta seemed like they cashed it in on the season.  Worth a shot, especially when you are out of it, and trying to go 7-0.  Beejmi, opted to take his biggest risk by going with Denver, which seemed way less obvious given Cleveland’s hotness lately.  Props to them both who opted to go heavy with choosing game outcome options rather than over/unders.  In fact only JAX/under was played  by the top three finishers for the week.

Fred14 has a 16.20 lead with two weeks left  over bruin7.  It was a crazy moving week as Fred14 finished in the negative, and several competitors gained some major ground.  bruin7 gained 25 points, and Allredb1 gained 12 points.  A repeat performance by bruin7 would put them in the lead, but as for now it’s Fred14’s contest to lose, even though the competition is in his head right now.  Week 16 will be great to watch, as a blowout by Fred14 will seal the deal, but if any ground is gained and that 16 point lead shrinks in any way, it will be more than interesting.

Personally I believe Fred14 holds serve, as I don’t foresee a repeat of week 15.

Allredb1 who is 25 points back needs a miracle, but can still finish respectfully.  I’m waiting at the edge of my seat on this one.

See you next week Gamers!!!

World Series of Handicapping: Look at the Leaderboard (Week 8)